Surva, January 1, Vasilyovden (St Basil’s Day) is folk holiday Surva. The children make “survachkas”, decorating cornel-tree twigs – the tree which, according to folklore mythology, is first to awaken for new life after the winter. Early in the morning, the children tap everybody on the back, wishing them good health; they, in turn, give them presents. In some regions of Western Bulgaria, masked men called survakari, visit the homes, patting the owners on the back, pronouncing a blessing for health and fertility.

Kukeru/Mummers  is a century-old tradition, which roots are found in the ancient Dionysus mysteries. Groups of masked young men, dressed in sheep and goat skins and wearing bells on their waist, perform ritual

games. These games symbolize the driving away of the dark forces of winter. The rhythmic clattering of the bells and ritual dances not only expel the evil forces, but is also aimed at bringing fertility in the coming farming season. The most famous mummers’ festival takes place in Pernik every end of January. Mummers’ groups from all over Bulgaria show their costumes and skills. The festival started in 1966 as a local carnival. Now it is the biggest carnival event in Bulgaria. Many foreign masquerade groups join the two-day parade. The voice of the thousand bells and the colorful costumes, symbols of the eternally reviving Nature – such an event is worth a visit.

Baba Marta March 1,Martenitza  is one of the ancient Bulgarian traditions, guarded and loved until present days. On the first day of March all Bulgarians are decorated with “martenitza” to be healthy and  happy. Martenitza is made of twisted woolen or cotton thread and considered to be a charm against evil forces. That is why Bulgarian women entwine coins, cloves of garlic, beads, iron rings, hairs of horsetail in traditional martenitza.  Martenitzas are tied on young animals, nowadays even on pets, and on fruit tries – for fertility.

Bulgarians wear martenitza until they see a stork. Then they tie it on a fruit-tree branch, make a wish for health and prosperity. Everybody is sure that this wish will come true.

Many legends circulate about this ritual. Bulgarians often call the month of March “Baba Marta” (Granny Marta). Obviously, she is fussy – sometimes warm and smiling, but seldom – furious and cold.

Bulgaria has retained a great number of traditional celebrations. Almost every week there is a folklore or religious celebration taking place somewhere in Bulgaria.  Cultural events are held throughout the year.  The Orthodox Easter is the most special of all religious festivities. The painting of eggs tradition survived even during Communism, when religious activities were not widely practiced. Minorities in Bulgaria also celebrate their traditional holidays, so Cultural events calendar is really rich.

There are many sites in Bulgaria worth a visit. Nine of them have been given UNESCO World Heritage status:

The rock churches in the region of Rusenski Lom River date back to the 12th-14th century A.D. Located 18 km south to Ruse, they were part of a mediaeval monastery of

St. Archangel Michael. High in the rocks, 40-50 m above the ground, natural caves were transformed into churches in the 12th century. The first hermits who lived here shared the ideas of isichasm – an orthodox doctrine, according to which the monks lived, keeping total silence. They found silence to be the best way to communicate with God. The best preserved murals are in the Church of the Holy Mother. All murals on the ceiling are very realistic, perfectly well preserved and clearly visible. There are 25 scenes from the New Testament, showing Jesus Christ’s last days of life. The original frescoes were made by artists from the Tarnovo School of painting and impress with the elegant figures and original colours.

Nesebar is located on a small rocky peninsula, connected with mainland with a narrow isthmus. This museum village attracts visitors with the quaint atmosphere, picturesque situation, unique collection of mediaeval churches and beautiful 19-century coastal architecture. 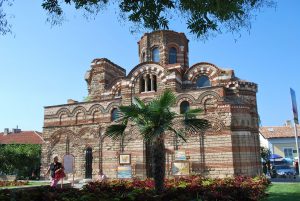 The ancient city was founded in the 6 c. BC as a Greek colony. It grew rich from trade, even minted its own bronze and silver coins. Its name was Mesembria. In the 5th and 6th centuries AD the city flourished again as a strategic, commercial and religious centre of the Byzantine Empire. Mesembria was a stop-off point for ships travelling between Constantinople and the Danube. In 12-14 c AD, by the number of its churches Nesebar came second after Veliko Tarnovo in Mediaeval Bulgaria. There were more than 40 of them on this tiny peninsula of which only 7 are comparatively well preserved and there are remains of another 8.

Rila monastery is located some 120 km to the south of Sofia, in the heart of the Rila Mountain. Founded in the 10th century, it has been the biggest spiritual and cultural centre in Bulgaria for hundreds of years. The visitor’s first sight of Rila monastery huge towering walls gives the impression of a fortress. However, a step through the archway produces a wonderful surprise. 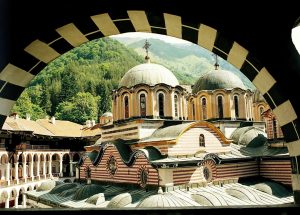 The Rila monastery is the largest in the Balkans and included in the List of World Cultural Heritage. The history of the monastery reflects the entire history of the Bulgarian state and people. The construction of the present-day monastery buildings started at the end of the 18th century, with means collected from the entire people. Numerous self-taught masters joined their skills to create this holy place.  Tour of the monastery includes a visit to the Monastery Church, which is of particular artistic value.

The Thracians are the earliest people known to history who inhabited Bulgaria’s land during the Bronze and Iron Ages.

What were the Thracians famous for? They were excellent vine-growers and wine-makers, famous brave warriors, whose horses were “faster than the wind”. The Thracians Kings possessed a lot of gold; they owned the ancient gold mines in the Rhodope Mountains. Gold for them was a symbol of supreme power and proof of their divine origin. The numerous Thracian gold treasures, unearthed in Bulgaria, show an exquisite creativity. The mural paintings in Kazanlak Thracian tomb made this modest-sized monument world-famous. It dates back to the 4th-3rd c. BC. The paintings are among the best preserved ancient frescoes of the Early Hellenistic period, therefore unique in the world history of art.

The frescoes, dated to 13th c AD (1239) are among the finest achievements of European Mediaeval Art. Some scholars compare the frescoes in Boyana church to the works of Giotto. Giotto is known to be the first of the great Italian masters of the 13th c, predecessor of the Italian Renaissance. Boyana Church was inscribed in UNESCO list of World Cultural Heritage in 1979.