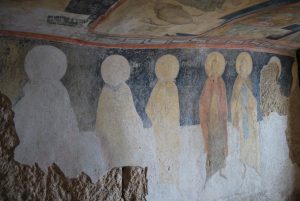 UNESCO World Cultural Heritage site since 1979. The rock churches in the region of Rusenski Lom River date back to the 12th-14th century A.D. They were part of a mediaeval monastery of St. Archangel Michael. High in the rocks, 50 m above the ground, local  hermits transformed natural caves into churches in the 12th century.

The first hermits who lived here shared the ideas of isichasm – an orthodox doctrine, according to which the monks lived, keeping total silence. They found silence to be the best way to communicate with God.

You will find the best preserved murals in the Church of the Holy Mother. All murals on the ceiling are very realistic, perfectly well preserved and clearly visible. There are 25 scenes from the New Testament. The original frescoes were made by artists from the Tarnovo School of painting and impress with the elegant figures and original colours.

UNESCO World Cultural Heritage site since 1983. Nesebar is located on a small rocky peninsula, connected with mainland with a narrow isthmus. This museum village attracts visitors with the quaint atmosphere, picturesque situation, unique collection of mediaeval churches and beautiful 19-century coastal architecture. The ancient city was founded in the 6 c. BC as a Greek colony. It grew rich from trade, even minted its own bronze and silver coins. Its name was Mesembria. In the 5th and 6th centuries AD the city flourished again as a strategic, commercial and religious centre of the Byzantine Empire. 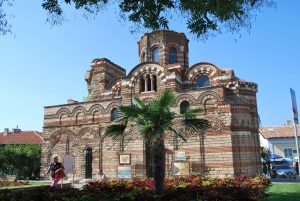 Mesembria was a stop-off point for ships travelling between Constantinople and the Danube. In 12-14 c AD, by the number of its churches Nesebar came second after Veliko Tarnovo in Mediaeval Bulgaria. There were more than 40 of them on this tiny peninsula of which only 7 are comparatively well preserved. 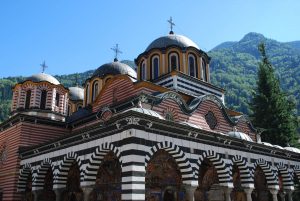 UNESCO World Cultural Heritage site since 1983. Rila monastery is located some 120 km to the south of Sofia, in the heart of the Rila Mountain. Founded in the 10th century, it has been the biggest spiritual and cultural centre in Bulgaria for hundreds of years. The visitor’s first sight of Rila monastery huge towering walls gives the impression of a fortress. However, a step through the archway produces a wonderful surprise. The Rila monastery is the largest in the Balkans. The history of the monastery reflects the entire history of the Bulgarian state and people. The Monastery church is of particular artistic value. The foremost 19-century Bulgarian masters of painting and woodcarving worked here. 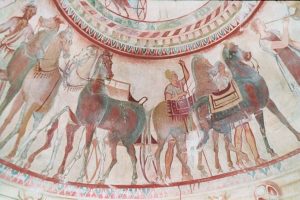 UNESCO World Cultural Heritage site since 1979. The mural paintings in Kazanlak Thracian tomb made this modest-sized monument world-famous. It dates back to the 4th-3rd c. BC. The paintings are unique in the world history of art because they are among the best preserved ancient frescoes of the Early Hellenistic period. In order to preserve original paintings they closed the original tomb and built an exact replica next to it, open to the public.

What were the Thracians famous for? They were excellent vine-growers and wine-makers, famous brave warriors, whose horses were “faster than the wind”. The Thracians Kings possessed a lot of gold; they owned the ancient gold mines in the Rhodope Mountains. Gold for them was a symbol of supreme power and proof of their divine origin. The numerous Thracian gold treasures, unearthed in Bulgaria, show an exquisite creativity. The Panagyurishte gold treasure impresses with its striking beauty.

UNESCO World Cultural Heritage site since 1979. This modest-sized mediaeval monument is a jewel, especially for visitors, interested in European culture, mediaeval art and history. Boyana church is a glittering art gallery,located at the foot of Vitosha Mountain, just 10 km away from downtown Sofia. At present Boyana Church consists of three connected buildings – from the 11th, 13th and 19th centuries. Only the first two churches, built in the middle Ages, possess significant artistic and architectural value. 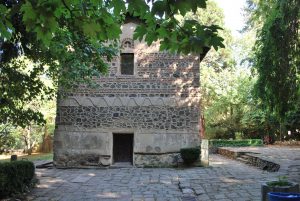 The frescoes, dated to 13th c AD (1239) are among the finest achievements of European Mediaeval Art. Some scholars compare the frescoes in Boyana church to the works of Giotto. He was the first of the great Italian masters of the 13th c, predecessor of the Italian Renaissance.

UNESCO World Cultural Heritage site since 1979.  Madara is the cult centre of the pagan Bulgarian state.

The greatest interest here is the rock-hewn horseman, a monument unique of its kind. The bas-relief was carved into the face of a rock 120 m high at a height of 23 m from the ground. The relief depicts a moving horseman, riding a stallion, accompanied by a hound and a bird. One of his hands holds the reins, the other one looks as if it has just thrown a spear at the lion lying in front of the horse’s legs.

There are 3 inscriptions in Greek. The inscription above is from 706-707. It relates how Khan Tervel helped the Byzantine emperor Justinian II to regain his throne. We find the name “Bulgarians: in it for the first time.

UNESCO World Cultural Heritage site since 1985. The 3rd-century BC Thracian tomb of Sveshtari is located in north-east Bulgaria, close to the town of Isperih. It is one of the finest Thracian tombs in Bulgaria. The tomb is the burial site of a royal couple from the Thracian tribe of the Getae. The combination of architecture, sculpture and paintings make this site unique. You can see the basic structural principles of Thracian cult buildings here – the resting place of the ruler of the Getae and his wife and the burial chamber. 10 female figures carved in high relief on the walls decorate the central chamber. The female figures, together with the decoration of the lunette in the vault are the only examples of this type found so far in the Thracian lands.